Many disease conditions can produce itching in cats. However, only a few disorders result in severe and/or prolonged itching. The primary symptoms of the “itchy pet” are scratching, licking, and/or biting of the skin.

Early signs that might be noticed include wet hairs, reddened skin, and hair loss in the areas of biting and scratching. Prolonged itching results in further hair loss, excessive scaling and thickening, and discoloration of the involved skin.

Secondary skin infections are common. Severe and/or prolonged itching is most always a symptom of an underlying skin disorder. As a result, correction of the underlying problem is imperative if the symptom of itching is to be successfully controlled.

Inhalant allergic dermatitis represents one of the most common causes of itching in cats across the United States. Atopy often produces severe itching and is frequently accompanied by skin infection (folliculitis), scaling, hair loss, and discoloration.

Atopy parallels human hay fever, except that itching is the primary symptom in the cat rather than the respiratory symptoms exhibited by people. Licking and chewing of the feet, legs, and flank are common symptoms reported by owners, along with generalized scratching.

Atopy is inherited and usually develops between the ages of 6 months and 4 years, following exposure to immune-system-stimulating substances called allergens. Although atopy is seasonal, sporadic, and relatively mild in its early stages, it often becomes perennial, and worsens in severity with time.

Unfortunately, pets do not outgrow these allergies. Dust (and dust mites), fungal spores, and pollens from trees, shrubs, and grasses can all initiate an allergy in cats. Since these substances are present in the air and can be carried hundreds of miles by wind, trying to avoid them by restricting a pet’s environment is not possible.

Diagnosis of atopy is based on clinical signs seen, seasonality of such signs, and allergy testing. There are currently two methods of allergy testing available: intradermal skin testing and serum testing. Intradermal skin testing involves injecting a number of different allergens into the skin of the patient and observing the injection sites for a corresponding allergic reaction.

This type of testing has been used effectively for allergy diagnosis for years and provides the most definitive way to find out what a pet is actually allergic to. Serum testing is also used to diagnose allergies.

These tests involve the evaluation of a serum sample from the allergic pet for antibodies to substances to which it might be allergic. The advantage such testing affords over skin testing is that it is much easier to perform and causes little discomfort to the patient.

However, since the accuracy of such tests is still being debated within the veterinary community, intradermal skin testing is still considered by some experts to be the most definitive way to diagnose atopy.

These medications temporarily suppress the itching sensations produced by the allergy. Steroid anti-inflammatories are never curative, yet they can offer effective relief from itching for days to weeks. Increases in water consumption, urination frequency, and appetite are sometimes seen in pets placed on steroid therapy.

Unfortunately, prolonged steroid usage over months might produce side effects much more unpleasant than these, including bloating (water retention), muscle atrophy, skin thinning, hair loss, and decreased resistance to infection.

In addition, while these steroids are being administered to a pet (especially dogs), its body’s ability to produce its own cortisone is suppressed, and might not return even when the steroid therapy is discontinued.

If this happens, the pet could go into shock and die. As a result, long-term usage of these drugs for allergic dermatitis should be done only under the close scrutiny of a veterinarian. 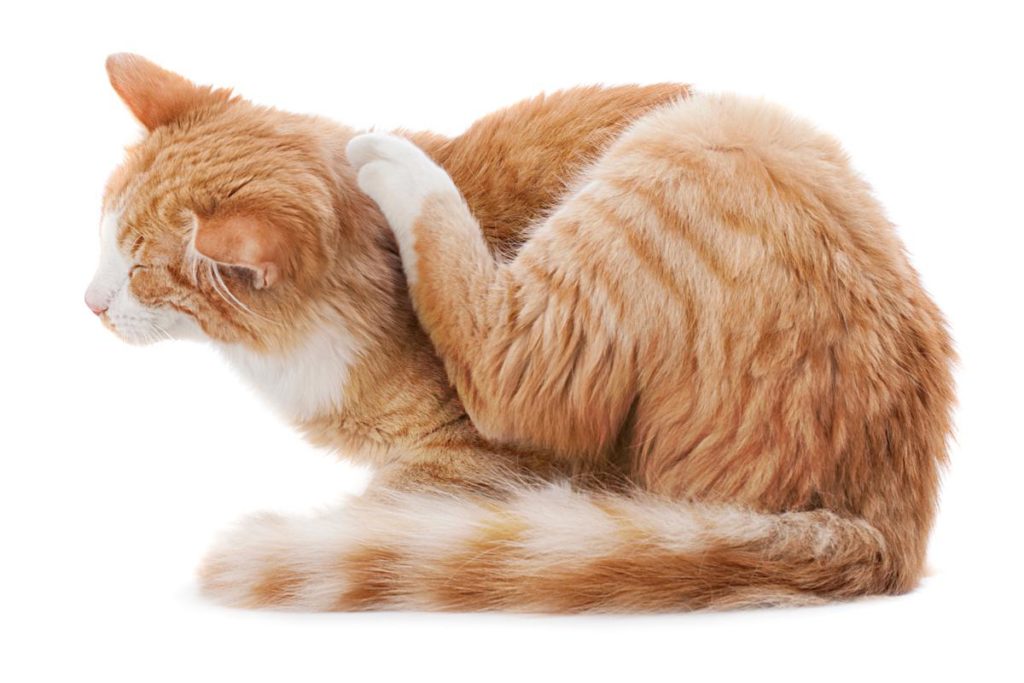 Scientific studies have shown that antihistamine medications alone do little to suppress itching caused by atopic dermatitis. Because antihistamine drugs can cause drowsiness, they can be useful for helping calm down a frustrated pet that can’t stop itching and chewing on itself.

Omega-3 fatty acids can be quite beneficial to atopic cats. It seems that these fatty acids, which are derived from cold-water fish such as salmon, do have the ability in some cases to reduce inflammatory responses and stop itching.

Others require additional medications, such as antihistamines, in order to achieve an acceptable comfort level. Although the effectiveness of this therapy can vary between cases, it does provide a unique alternative to steroid therapy.

Topical treatments by themselves do little to provide lasting relief to the atopic pet. However, when used in combination with other forms of therapy, they can potentiate the effects of these other treatments.

One such topical product, a colloidal oatmeal conditioner, can provide effective topical relief for atopic cats. Along with applying it after bathing, it can also be used as a daily spray (create a 10 to 25% mixture with filtered water and place in a spray bottle) as well.

The advantage of using oatmeal conditioners versus shampooing is twofold: (1) A conditioner will help moisturize and soothe the skin with repeated use, whereas shampoos can dry out the skin; and (2) colloidal oatmeal is known to be an effective anti-itch agent and can be applied as many times during the day as necessary to provide relief.

Just be sure to brush your pet thoroughly after each application to work the conditioner down to the skin.

An alternative approach to treating allergies aside from the ones just mentioned is to hyposensitize the pet using allergen injections. This approach requires allergy testing to be performed, followed by a series of injections of the exact allergens or agents causing the reaction.

Although this approach is not effective in all instances, some veterinary dermatology specialists do report at least an 85 to 90 percent success rate; this rate is based on at least 50 percent overall improvement in the allergic pet’s condition.

However, since inhalant allergens are poor stimulators of immunity, this improvement takes some time. Owners should allow anywhere from 1 to 6 months before making a final judgment as to the effectiveness of the treatment. In most cases, maintenance injections given monthly will be required for the lifetime of the pet.

Aside from the discomfort caused by the actual bite of a flea, cats might develop an allergic response to the flea’s saliva deposited in the skin during feeding. Moderate to severe itching and hair loss can result, especially along the back near the tail, hips, and hindleg areas.

Some allergic pets can harbor staphylococcal bacteria not found on the skin of nonallergic pets. Irritation resulting from fleabites can produce a skin infection (folliculitis) on the damaged skin surface and hair follicles.

Toxins released from these bacteria might further intensify the itch-scratch cycle. As one might guess, successful treatment of a flea allergy is heavily dependent on the ability to control fleas on the pet and in the environment.

Food allergies are a potential cause of nonseasonal itching in cats. Other dermatological symptoms might include hives, facial swelling, and chronic ear infections as well.

Besides these skin-related problems, food-related allergies have also been implicated in gastrointestinal disorders, such as diarrhea, vomiting, and/or excess gas.

Diagnosis of food hypersensitivity requires the exclusive feeding of a hypoallergenic diet containing a protein source that is not commonly used in commercial pet foods for 8 weeks. Such diets are available through veterinarians.

If a positive diagnosis is made, the pet will need to remain on the hypoallergenic diet indefinitely. Simply changing food brands or types seldom benefits food allergy cases since most commercial foods contain similar ingredients.

Food items such as milk, animal proteins, and vegetable proteins are the most common culprits causing food-induced allergies in pets.

The haircoat of cats offers an efficient protective barrier to many substances and agents that could produce an allergic reaction just by coming in contact with the skin. Therefore, those areas relatively devoid of hair such as the chest, abdomen, and feet are more susceptible to contact allergies.

The most common contact-allergy-producing agents include detergents, shampoos, pet sprays, collars, and insecticides, which, in liquid form, can penetrate the normally protective haircoat. In addition, bedding that is moldy or has been chemically treated can cause contact hypersensitivity.

Symptoms of such exposure include redness and swelling of the skin and intense itching. These signs will generally develop within 24 to 72 hours after exposure. Chemicals that can normally irritate the skin might produce similar symptoms immediately after contact.

Such reactions are not to be confused with slower developing hypersensitivity. Treatment of contact allergies requires the removal of the offending agent and administration of topical and/or systemic anti-inflammatory drugs.

A thorough history of the pet’s exposure to chemicals and exposure to any environment vegetation is imperative in the veterinarian’s effort to identify the allergy-producing agent. Bacterial Infections Bacterial infections involving the skin are itchy in themselves.

As a result, when they occur secondarily to an allergy or parasitic infestation, it can mean sheer misery for a pet. It is for this reason that many treatments for other skin ailments are combined with antibiotic therapy.