The skin is an organ, like the heart or liver. In fact, it is the largest organ of a cat’s body, enveloping and protecting the animal from environmental threats and diseases. The soft fur coat, which grows from the skin, is composed of different types of hair and also plays a protective role.

The ancestors of the domestic cat were shorthaired, but selective breeding has produced other coat types, ranging from silky longhaired to almost hairless.

The cat’s skin has many roles: it acts as a barrier against disease-causing agents, or pathogens; it forms a waterproof layer, preventing vital fluids from leaking out of the body; its blood vessels help regulate internal body temperature; and it makes vitamin D, which is necessary for healthy bones.

Cats have loose skin that complements their natural flexibility of movement. This looseness also helps when fighting, because it allows a cat to turn to some degree and defend itself, even when its skin is held.

The skin has two layers: the outer layer is called the epidermis, and the inner, the dermis. The epidermis is mainly composed of layers of dead, flattened cells containing a tough protein called keratin and water-resistant chemicals. The hair and claws are also made largely of keratin.

The deepest, or basal, layer of the epidermis is only about four cells thick and consists of living cells. These cells divide repeatedly to replenish the outer layers, which are constantly shed from the body’s surface. The epidermis also contains immune cells that fight pathogens.

The inner layer, the dermis, is more complex and contains connective tissue, hair follicles, muscles, blood vessels, sebaceous and sweat glands, and millions of nerve endings that detect heat, cold, light touch, pressure, and pain. Cats do not produce sweat to cool the skin. Instead, they produce oily secretions from the sweat glands that condition and protect the skin and coat.

A cat’s skin is pigmented—except in areas where the fur is white—and is the same color, although slightly paler, as the hair that grows from it. Glands in a cat’s skin also release a scent, which is a vital component in feline communication.

Cats have four kinds of hair: down, awn, guard, and sensory hair. Down hair is fluffy, short, and thin and provides insulation for warmth. Awn hair is intermediate in length, has thickened tips, and provides warmth, but is also protective.

Guard hair forms the outer coat, which protects the cat against the elements. These straight hairs, which taper toward their end, are the thickest and longest of the three types of coat hair. They are more dense on the back, chest, and abdomen.

Whiskers, or vibrissae, are long, thick sensory hairs found on the cat’s head, throat, and forelegs. These touch sensors help a cat to explore in the dark and to detect nearby objects. Other sensory hairs, called tylotrichs, are scattered throughout the coat and have a role similar to that of the whiskers.

Cats have compound hair follicles, which means that many hairs, but only one guard hair, grow from a single follicle. This creates a thick coat—one square millimeter of cat skin can contain as many as 200 hairs. Hair itself is made of overlapping scales, which are the remains of keratin-packed cells.

Each follicle has a sebaceous gland, which produces oil to waterproof and condition the coat, and a small muscle that raises the hair when the cat is angry or excited, making it appear larger and more daunting to enemies.

The sensory hairs are by far the least numerous of all types of hair. The other types of hair occur roughly in the ratio of 100 down: 30 awn: 2 guard hairs. However, selective breeding has altered this proportion and lengths in many breeds to produce a variety of coats.

For example, the Maine Coon’s longhaired coat does not contain any awn hairs; the Cornish Rex’s coat does not have any guard hairs, just curly down and awn hairs; and the apparently hairless Sphynx has a light covering of down, but lacks whiskers.

Coats come in a bewildering range of patterns and colors. Coat color is produced by two forms of the pigment melanin: eumelanin (black and brown) and phaeomelanin (red, orange, and yellow). Except for white hair, all colors are the result of varying amounts of these two pigments on the hair shaft.

Pigmentation in cat fur varies from an even distribution along the hair shaft, which produces a solid coat, to no pigment at all, which gives white fur. A solid coat’s color varies with the density of pigment in the coat hairs. For example, dilute black gives blue. If just the end part of each hair holds color, the coat is tipped, shaded, or smoke. Ticked shafts have alternating dark and light bands and give a color called agouti.

Black and red and their dilute forms, blue and cream, are known as Western colors because they traditionally occurred in European and American breeds, such as the British Shorthair and Maine Coon. Solid-white and bicolored are also considered Western.

Coat colors traditionally found in breeds with origins east of Europe, such as the Siamese and Persian, are known as Eastern colors. They are chocolate and cinnamon, and their dilute forms, lilac and fawn. All colors now occur globally. 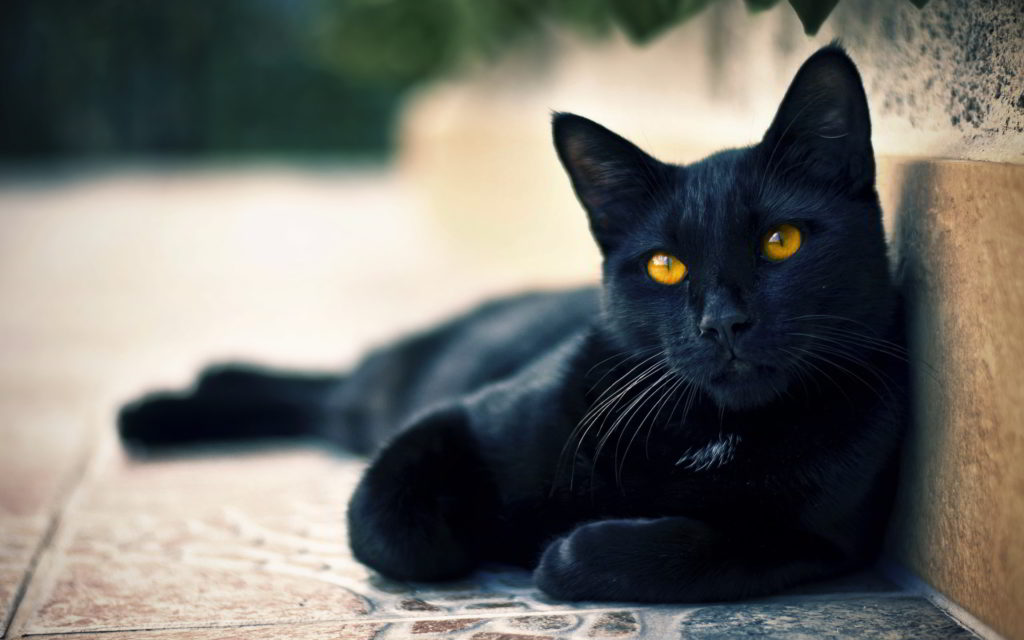 When just the tip of each hair is heavily pigmented, the effect is known as tipping, chinchilla, or shell. The unpigmented section of the hair is usually white, or silver, although undercoats with yellow or reddish coloring can occur.

A parti, or parti-colored cat, has two or more colors in its coat. Partis include bicolor and tricolor cats and are found in many breeds, both shorthair and longhair. Partis also include torties and tabbies with white patches. When torties have a high proportion of white fur, the pattern is described as “calico” or “tortie and white.” 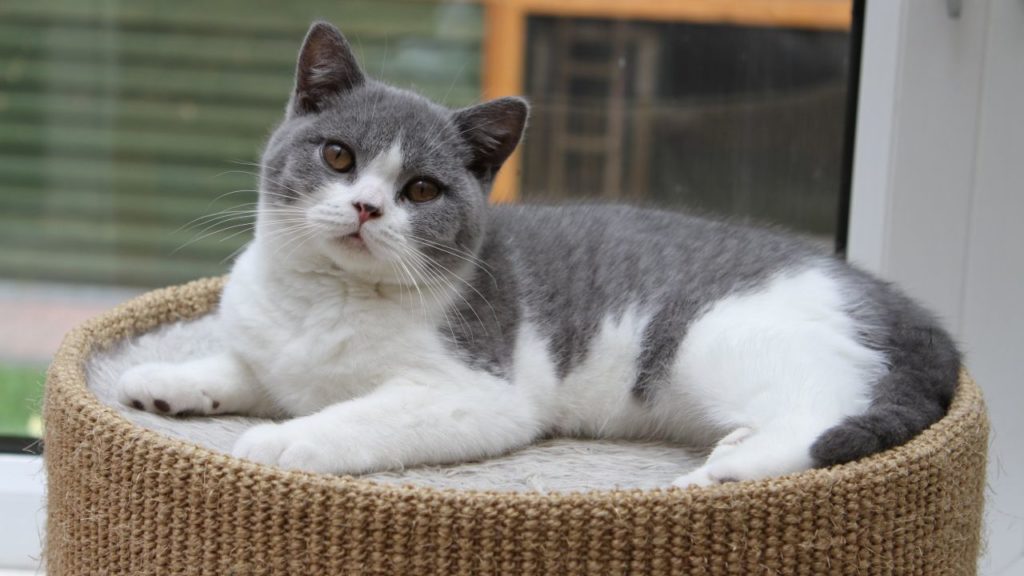 Tortoiseshell, or tortie, coats have patches of black (or chocolate or cinnamon) and red fur either closely mingled or in distinct patches. Dilute forms of the coats also appear: blue, lilac, or fawn with cream fur. Patches of red or cream fur always have some tabby markings, and if the other color patches are tabby, too, the cat is known as a patched tabby. Tortie cats are almost always female. 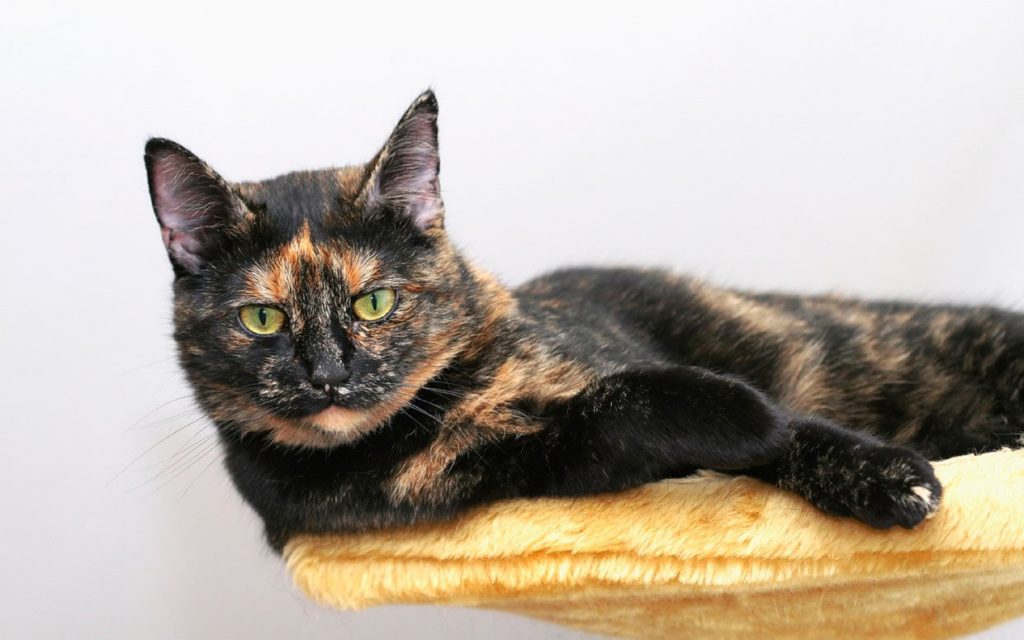 Coats in which the extremities are dark and the body paler are called pointed. In the Siamese and Persian Colorpoint, this pattern is controlled by a heat sensitive enzyme involved in producing hair pigment. The enzyme works only in the cooler extremities of the body, hence the darker fur. The pointed coat of the Turkish Van, with dark fur on the head and tail only, is a form of white spotting. 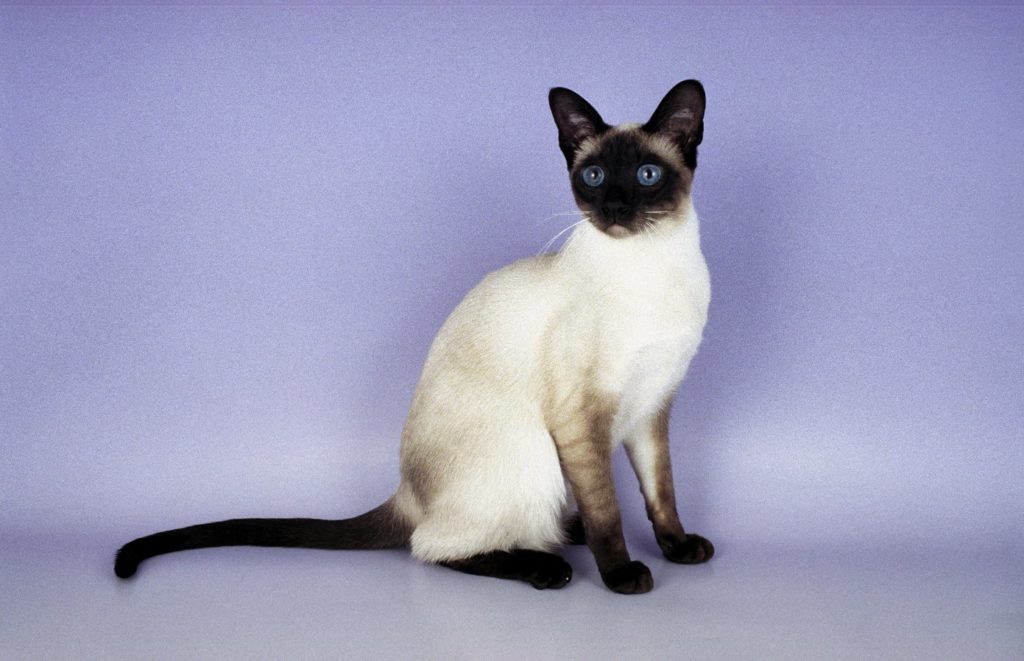 The upper quarter of each hair is colored in shaded fur. Shaded fur appears darker on the back, where the fur lies flat. When the cat moves, shading produces a rippling effect. A coat in which the shaded part of the hair is red or cream is called a cameo. 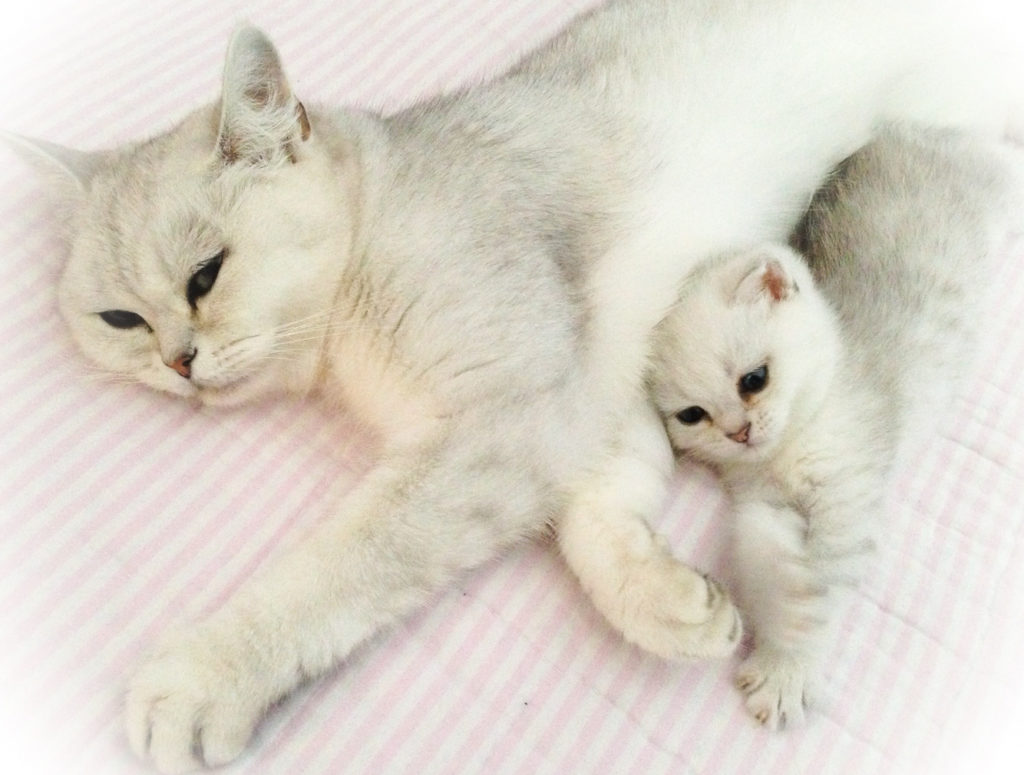 When about half of the uppermost hair shaft is colored, the coat is known as smoke. Cats with smoked fur often appear to have a solid coat. When the cat moves, however, the paler roots become more visible and the coat “shimmers.” 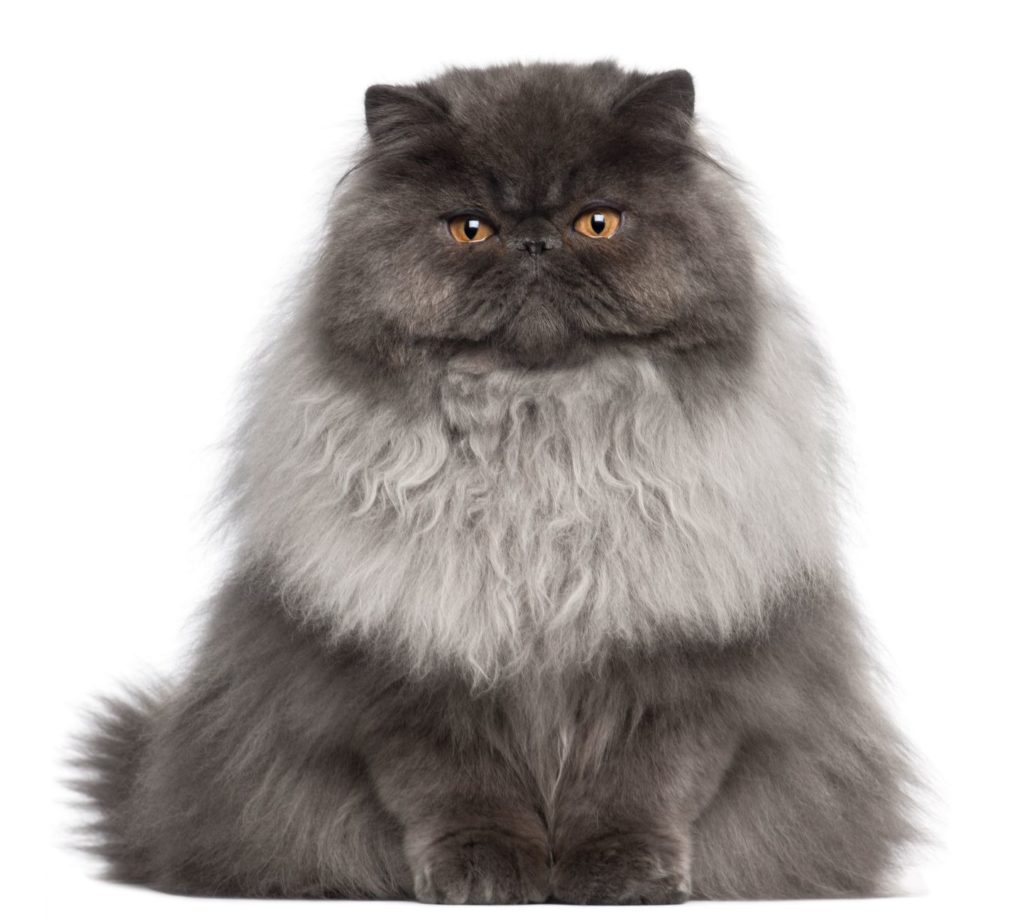 The hair shafts have alternating pigmented and paler bands in ticked coats. The tips of each hair are always pigmented. Also known as agouti, ticked fur occurs in many wildcats and other mammals because it provides excellent camouflage. 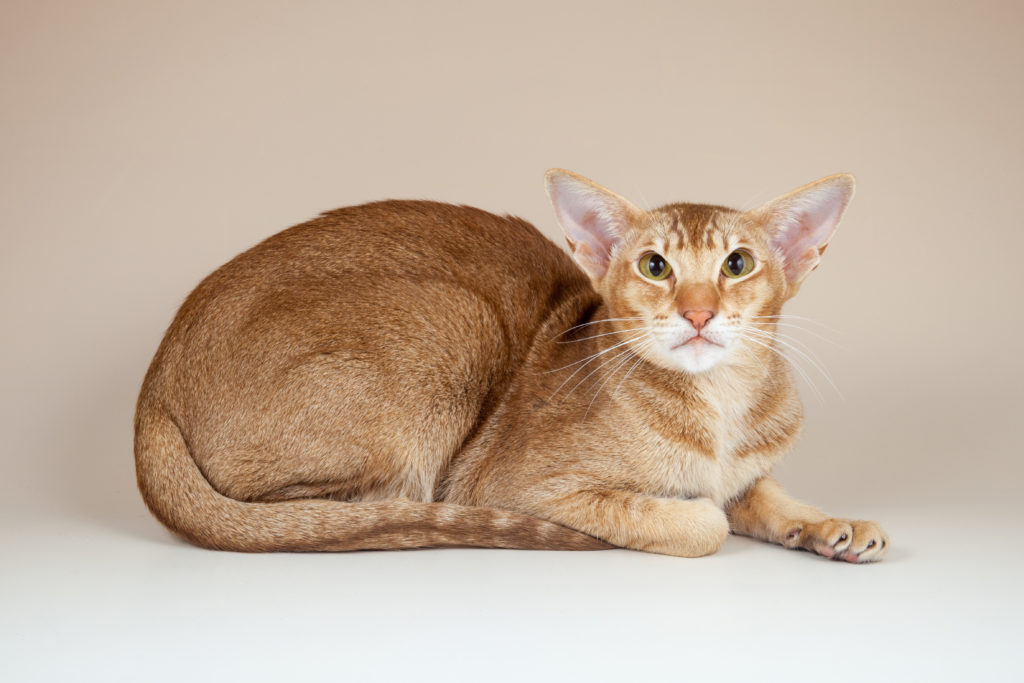 Patches of white in a cat’s coat are produced by a dominant gene that suppresses the production of colored fur. The result is a parti-colored coat. The patches vary from just one small area to an almost all-white coat. 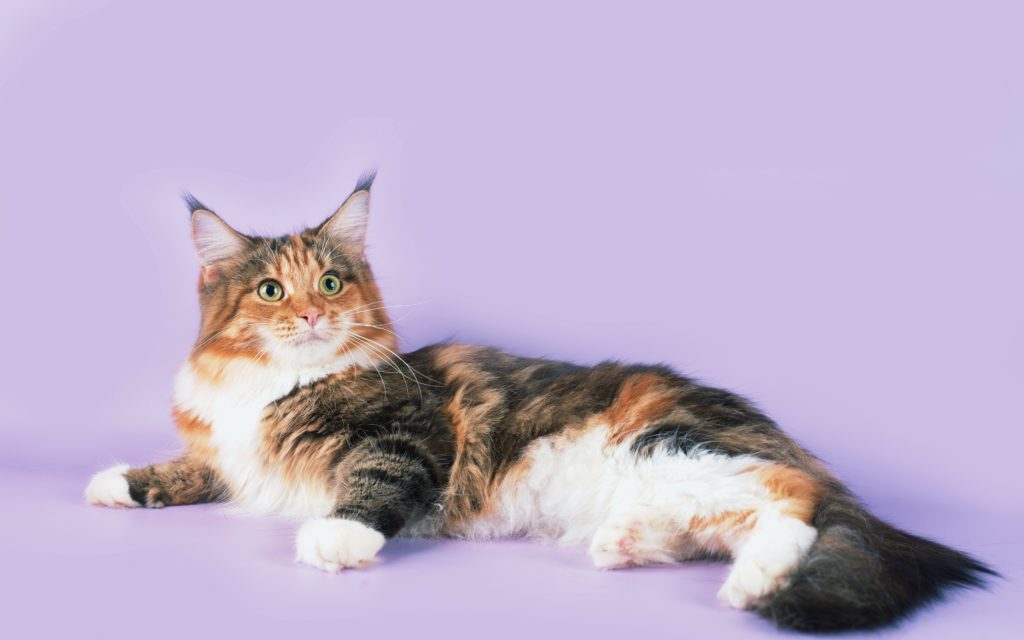 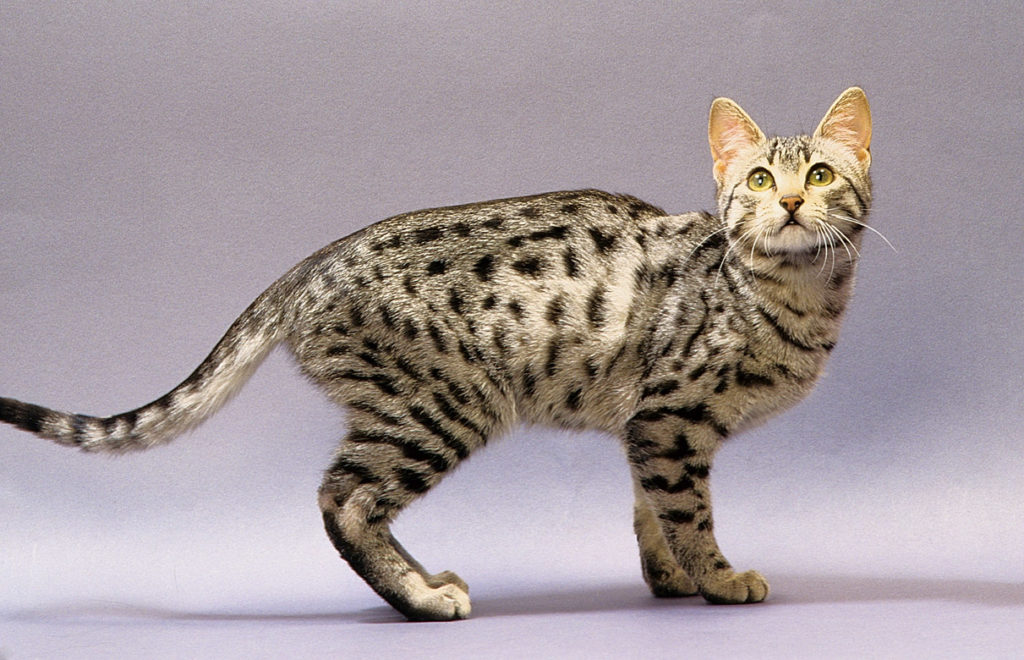