Cats are notoriously choosy about who they will allow to touch them, let alone  pick them up and pet them. Some cats simply do not like being picked up at all, and will struggle to get free.

There are right and wrong ways to handle a cat—learn how  to do it correctly and the chances are your cat will enjoy the opportunity to get closer to you. If a cat is comfortable with being held, grooming and any necessary health checks will be made much easier.

The best time to get a cat used to being handled is when it is a kitten. Early and routine contact from about two or three weeks old helps kittens not only to develop faster but also to grow into more contented cats that are happy to be handled by humans.

If you have children, teach them  to be gentle. Mishandled kittens grow into nervous cats who keep their distance from people and never really learn to enjoy fussing and petting. Cats have long memories and will always avoid children who have handled them too roughly.

Some cats are simply less demonstrative than others, regardless of their early experiences. If your pet likes to maintain  a friendly distance, respect his wishes.

How to Pick Up a Cat

Cats rarely enjoy being picked up, so only lift your cat when necessary, unless you are sure he welcomes it. Handle him calmly and quietly, stroking his head, back, and cheeks to relax him. If he wants to be put down again, he will make his feelings clear.

A very young kitten can be picked up by the scruff of his neck, like his mother does, but he will need more support as he gets older and heavier. When his mother stops picking him up like this, so should you.

From then on, the correct way to pick up your cat will be to approach from the side and place one hand ﬂat against his rib cage, just behind his front legs. Use the other hand to support him under his hind quarters. Hold him upright, as cradling him in your arms can increase his sense of insecurity.

Cats are more independent than most  other pet animals and although many like stroking and cuddles, they still appreciate their own space. Do not try to stroke your cat unless he clearly shows that he is willing to be touched. Put out a hand or ﬁnger for him to sniff.

If he touches you with his nose or rubs his cheek or body against you, he  is in the mood for contact. If he shows no interest, leave it until another time. Once your cat is amenable to being petted, begin by stroking him along his back in a slow, continuous motion.

Always go from head to tail, never the other way against the direction of the fur. Stop when you reach  the base of his tail. If your cat is enjoying  it, he may arch his back to increase the pressure of your hand. Learn how your cat likes to be petted.  The top of the head, especially between  and behind the ears, is often a favorite place.

It is thought that being stroked in this particular spot reminds cats of when their mother used to lick them there. Some cats also like being stroked under the chin. Rubbing the cheeks with a circular motion is popular with many cats, because it helps them spread their scent on to your ﬁngers.

Your cat may like being raked gently with the ﬁngers, but do not stop and scratch him  in one place. Most cats dislike being patted, especially along the ﬂank. When your cat jumps on to your lap and lies down, pet him once to see if he wants attention or just a warm place to snooze.

If he ﬁdgets or his tail twitches, stop stroking. A cat that is enjoying being petted may change his position so that the part he wants stroking is uppermost and closest  to your hand.

Some cats like rough play and will grab and “play bite” at a hand that tries to rub their belly. If your cat sinks his claws in, keep still until he disengages. Pushing farther in toward him may surprise him enough to let go. In general, when you stop, so will he.

If he kicks with his back legs at your hand, do not assume that he wants his paws touched. Try stroking one foot lightly  with a ﬁnger in the direction of his fur;  if he pulls his foot away, ﬂattens his ears,  or walks off, let him be.

Knowing When to Stop

Watch your cat’s body language and stop petting him if he seems to be getting angry. One of the early warning signs that a cat is feeling ill at ease is lip-licking. Be careful if he is lying on his back exposing his belly, since this is not necessarily an invitation to pet, although he may tolerate you touching his head.

Even in a normally docile cat, presenting the belly may be an aggressive defense posture that leaves him free to kick,  bite, or claw. If you misjudge his mood and are rewarded with a bite or a scratch that breaks the skin, wash the wound with soap and water and treat it with antiseptic.

See your doctor if the area around the bite swells or reddens and starts oozing. Occasionally, infection acquired through a cat scratch can cause symptoms in other parts of the body and, uncommonly,  a ﬂulike illness.

Never try to pick up or pet a cat that does not know you. Give him time to sniff and investigate you, and try stroking him while talking in a calm tone. If he gets used to you  being friendly he may let you handle him on further acquaintance. If he seems at all nervous, back off, since he may lash out.

Be especially cautious about attempting  to pick up or even stroke feral cats, however much you feel they are in need of affection. Although the most likely response of a feral cat to well-meant approaches from humans is to run off— unless perhaps food is involved—an animal that feels cornered or threatened may instinctively resort to aggression. In certain countries, a bite from a feral cat could carry the risk of infection with rabies. 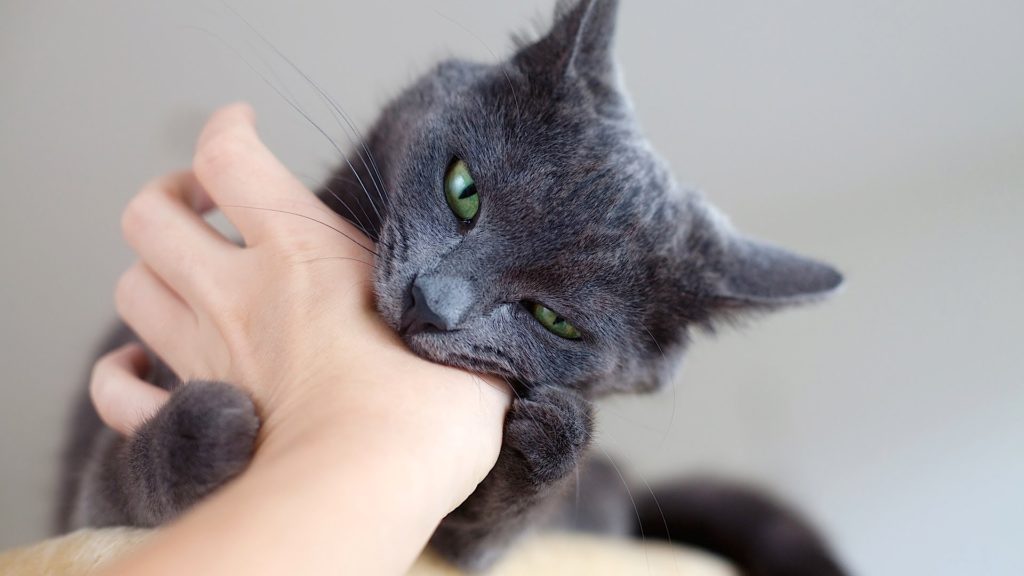